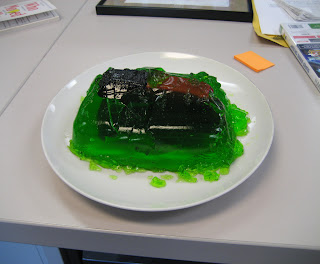 I came back from grabbing some lunch to find that desert had been supplied.
Shame it was my favourite red stapler.

Now I'm going to have to set the building on fire.

Posted by Reckless at 3:43 pm 0 comments

The photos from Vietnam are closer to being finished.
I've uploaded a good chunk of them to a webalbum, so if you're interested, have a look!
http://picasaweb.google.com/reidcparker/Vietnam

We're still in the middle of captioning everything, and we really need to do that before we forget what everything was. I've also been tagging the locations on Google maps, so if your bandwidth is up to it (sorry Mum), you can view the satellite images of Vietnam with our photos pinned onto it.
Posted by Reckless at 11:13 pm 0 comments 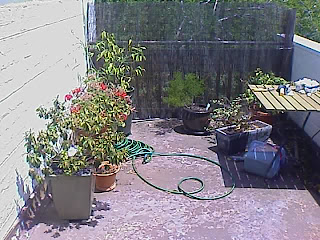 Nice day in Melbourne, tired as shit, photos to follow
Posted by Reckless at 12:27 pm 0 comments 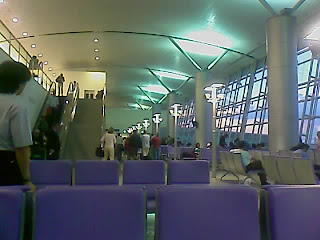 Our plane from Saigon to Singapore has been delayed, which means we'll only get to spend 3 hours at Singapore airport!
/sarcasm

We needed to get water and barely had enough cash left. This is because we were used to paying no more than 5000d for a bottle and they were charging 32000d for them after passing customs.

Posted by Reckless at 9:28 pm 0 comments 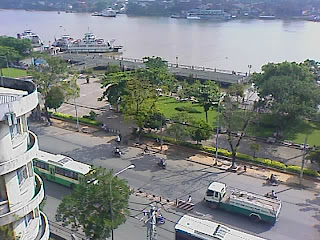 Our last day in Vietnam is in Ho Chi Minh City (or Saigon as every single person still calls it). This is the view from our breakfast table at the Majestic Hotel. It was a treat being able to sleep in clean sheets, have a shower in water that doesn't smell and have people waiting on you that appeared happy to do so. (appeared was supposed to be in italics, but my phone can't do that :).
Next stop is Singapore for a bit of duty free then we're back in Melbourne in time for work on Monday.
Woo hoo.
Posted by Reckless at 1:03 pm 0 comments 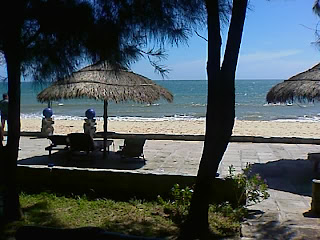 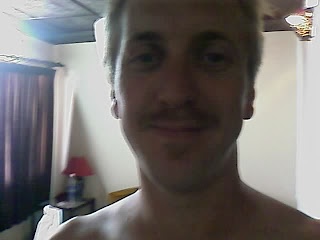 We're finally in the sun! We are 5 seconds walk from the beach and I've just had my first shave since we arrived in Vietnam. Deb isn't too pleased.
Posted by Reckless at 10:22 pm 0 comments 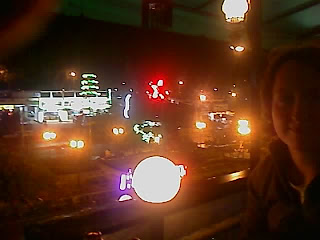 This is weird. After walking the streets of Hoi An being eyed up like a walking bag of money, we're now in Da Lat feeling like celebrities! People walking past yell out hello ard get big grins on their faces when we reply with xin chào. We paid next to nothing for a couple of coffees (around 1/3 the price we've had to pay up until now) and the hotelier looks honestly pleased to see us. I'm pleased we did the north first so we could really appreciate the difference.
We're doing a day trip with the Easy Riders tomorrow which should be a laugh. It's our first time on the back of a motorbike since we've been here and the traffic is ridiculous, but I'm sure we'll be fine.
Posted by Reckless at 12:44 am 0 comments 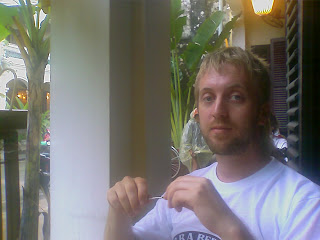 Just booked our tickets to Dalat. From what I can figure out, we get a cab to De Nang, train to Nha Trang, stay the night and then a bus to Dalat.
The weather has turned a bit rainy in Hoi An, so the bad stuff is going to hit the coast soon. Hopefully it clears up or we'll have to skip Mui Ne and spend a few days in the Mekong Delta instead. At least the typhoon has been downgraded to a tropical storm, so we'll be a bit safer.
Posted by Reckless at 8:21 pm 0 comments 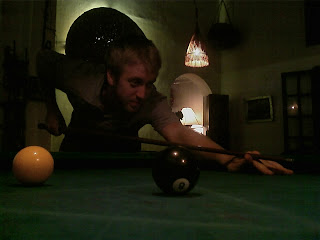 They have free wi-fi AND free pool. How could we refuse?
Posted by Reckless at 10:39 pm 0 comments 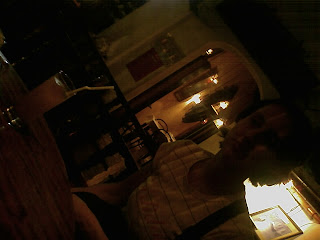 We ended up at a bloody westerner bar in Hoi An. Oh well
Posted by Reckless at 2:37 am 0 comments

We arrived in Hué a few days ago to clouds and drizzle. Caught a couple of cyclos for a tour of the citadel, but eventually got sick of the wet cushions soaking through our clothes and finished the tour on foot.
The next day was a bus tour of the DMZ which ended after visiting the Vinh Moc caves where civilians lived for 6 years during the war.

We're now in Hoi An, after an afternoon getting fitted for suits, shirts pants and jackets.
It was a little daunting walking past the dozens and dozens of shops, each one full of bolts of material and clothing samples. We settled on a place that looked good and was staffed by a couple of friendly young girls with good english. After poring over catalogues thicker than the yellow pages, we settled on some clothes that looked good. We go back tomorrow to see what they've achieved and if it's all good will order some more.

This post is a little lacking in detail, but I'll fill it out when we get some more time (and get to use a computer that isn't sharing a dialup connection with 2 other computers)

I'd planned to get a pre paid sim card so I could use the internet on my phone, but nobody seems to know what I'm on about. I know they exist, but the terminology must be different.
It means that instead of being able to update this on the fly, I need to sit in an internet cafe and try writing about a whole week all at once.

So following on from the last post:
We were walking back from the train station after missing our train when a minibus pulled over, a couple of vietnamese (mother and son I think) jumped out and started waving us onto the bus.
We eventually figured out they were going to Halong Bay and there were another couple of tourists (Chris and Jo) on the bus as well so we thought we'd give it a shot. 4 1/2 hours, half a dozen crammed on new passengers, a crying puking baby and an attempt to overcharge us later, we arrived in Halong Bay. The English couple who were on the bus with us were going to Cat Ba island as well, so we bought our boat tickets together and set off. After visiting some natural caves (thoughtfully lit up for us with coloured lights) we arrived on Cat Ba island. To get to Cat Ba town, it was then just a 20 minute ride in a minivan (16 people in a 12 seater with all of their luggage) which wasn't nerve wracking at all..
Accomodation was easy to organise and we spent the evening dozing after a hell of a long and tiring day.
Before going to sleep though, we managed to take the obligatory millionaire photos:

Cat Co 2 is a beach that is accessible via a rickety boardwalk attached to the rocks around one of the bays. Apart from the parts held together with sticks and wire, it was actually pretty sturdy. We were the only ones there at 8 in the morning, so after booking a couple of loungers, buying some beers and getting rid of the syringe that was spoiling the view, we sat back and enjoyed a bit of sun.
After a while, a dude came along offering a 40 minute massage for a couple of dollars. After turning him down for a few minutes I caved in and let him do his stuff.
I could get used to having those regularly I think.
Kein was born on Cat Ba and has been trained in Hanoi and China as well as doing a bit of time in Sa Pa as a porter and part time masseuse. Nice bloke and maybe the first genuine person we'd come across in Vietnam (don't worry, he wasn't the last).
That evening we had dinner at a seafood restaurant, so Deb thought she'd be adventurous and ordered the crab "with lemongrass".
Perhaps the lemongrass made it sound fancier than it was, because she ended up with a whole boiled crab sitting on a plate. It hadn't been prepared at all, so after hacking into the thing with nutcrackers, the owner arrived laughing with a pair of scissors and cut the thing in half for us.
I have a feeling that Deb won't be ordering crab next time and will just stick to the dog.
Day 3 in Cat Ba was our last day, so we rented a couple of scooters and took off around the coast of the island. Deb was a little nervous but got the hang of it eventually and we had fun nipping around the roads and tooting our horns like authentic Vietnamese.
We dropped the bikes off after a couple of hours, checked out of the hotel and hopped in a van to take us to the "fast ferry". The ferry was maybe 10-12 metres long, so it was nice and crammed once the dozen motorbikes were rolled on. I ended up sitting right at the front of the boat keeping an eye on our bags that were just sitting on top of the roof.
After the ferry, we were transferred onto the bus to Hanoi with a lot of other locals. Luckily we got on fairly early, so didn't need to sit on plastic stools in the aisle (as was the case for everyone who got on after us).
We made it back to Hanoi without any dramas, checked into our hotel and went out for a couple of cheap beers. By cheap I mean 2000D (which at last count was around $0.13AU).

Tune in next time for: "Name that Smell" and "No motorbike for me, please"
Posted by Reckless at 2:29 pm 0 comments