So, Picasa has a nice feature where you can create an album and then sync it online.
It means any album changes you make are automatically uploaded/altered online.

You can add new photos, add captions, tweak the colour.

Yup. 90% of the photos I've uploaded over the years have disappeared.
That wouldn't be so bad if I hadn't added the damn things, one by one into blog posts: 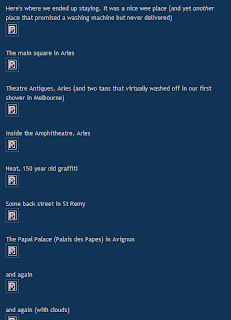 If I really want to get things back the way they were, it's going to cost me half a day at least.
Part of me is considering paying for hosting and creating my own site, independently of Google.

The other part is a lazy bastard.