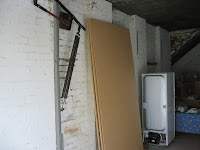 On Sunday,  measured up and got cutting. As there's no power downstairs, I had to hang an extension cord out of the top window, but as long as it didn't rain I would be fine. Naturally, not long after I got started, hailstones the size of marbles started falling from the sky. I sat those out hoping it wouldn't rain, which didn't happen until the light got too low to work in. 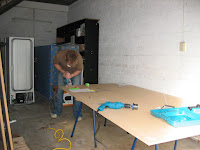 The jigsaw took a little getting used to (and probably wasn't the perfect tool for the job) but I've got the two top side panels cut out and I think the rest will be a lot faster. (note the dustmask. mdf dust is a killer) After tidying up, I came inside to sit around and listen to the rain. As our garage has a couple of small leaks, after half an hour I thought I'd pop down and make sure everything was ok. I'm pleased I did, because water had come in over a metre past the edge of the door, getting everything wet. I can't imagine mdf being very forgiving when it comes to water, so hopefully I got to it soon enough and it won't be to damaged. 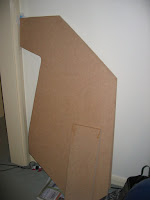 It's still winter here, so the sun starts going down around 4pm. By the time I get home from work, it's pretty much black, so I won't be able to do anything again until Saturday! At least now I know what to expect and have everything at my disposal so I can make some real progress. I'd like to be able to start putting things together next Sunday.

verdict: this thing is going to be as heavy as a motherfucker