So, we're now on Cat Ba Island, relaxing after a busy couple of days.
Here's a quick run down:
Arrived in Hanoi around lunchtime.
Caught a minibus from the airport to the city (only $2 or so).
After being dropped of at the hotel we asked for, decided to say no thanks to the scammer and walked round to the other side of the lake to the actual hotel.
Walked around that evening trying to find the train station to buy tickets for the morning train to Hai Phong. Couldn't find it (apparantly a lot of people have had trouble with the Lonely Planet map of Hanoi), so we went to a restaurant for dinner and asked one of the guys at the hotel to pick up tickets for us instead. I proposed to Debbie at the restaurant, which caught us both by surprise. This photo was taken a minute or so later :) 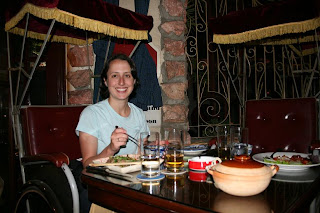 Getting up at up at 5am the next morning, we found that they hadn't managed to get tickets for the decent seats, so didn't buy them. We thought we'd just go to the station and get normal tickets ourselves. Shame the hotel dude sent us to the wrong station, which we discovered after taking a taxi there, but luckily a guy with a three wheeled motorbike heard us mention Hai Phong in amongst our jibberish and drove like a madman for a couple of km to get us to the right station. 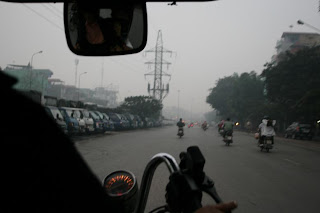 Missed it by that much.
Ok, this place is too hot, need to get a beer. Will finish the story later.
Posted by Reckless at 3:46 pm

Wait, hang on. Proposed?! Am i reading that correctly? Proposed, as in marriage? as in you asking Deb to marry YOU? I know i'm in England, bit far from everywhere and everyone, and pretty sure i do understand the written language of english, but you put it in such a throwaway line, with nary a further mention, that i'm almost not sure i actually read it correctly!
Besides the fact that you rewrote this post, which previously, i swear, had no mention of this whatsoever.

Well, good for you. bout time you realised it. It then begs the questions, when, where and will you wait for me?

Mate, it's looks like you're both having a blast. Things are going alright here, work is good. Finally get paid, in pounds. Yay!
Check in with you again, once i have my own internet connection going. I hope.
:)