I hate the idea that my parent's photos are trapped in a cupboard and run the risk of never being seen again. There's also the problem that those photos are unique, and have no backups. That actually bothers me more to be honest.

This is why whenever I go home for a visit, I try and scan at least one album. On my last trip, I decided to copy all of the photos from their computer (including these scans) and get them into some kind of order.

Picasa again made this really easy, because now you can edit an image's exif data direct in the application, without having to install a third party app.

Of course, now that I've got my parent's photos as part of my photo library, I've been overwhelmed with the compulsion to tag everything. I've already done all of the faces, so I'm now in the middle of geotagging. Let me tell you, trying to find out where a photo was taken in 1975 is a lot of fun.
This is my best effort I think. 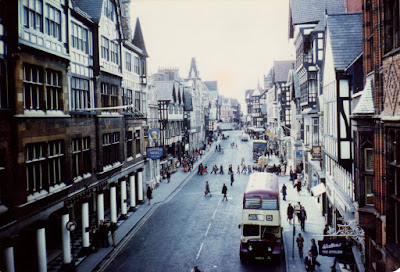 I knew it was in England somewhere because of the bus, and the side of the road the traffic was on.
There is a Grovenor Hotel on the left, and Walton's Jewellers on the right.
The only place I could find that could fit the description was here: 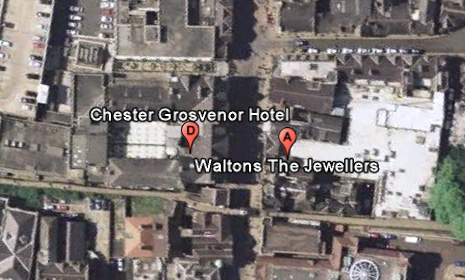 I opened the Panoramio layer on Google Earth to check out photos that people had taken in the area.
I think this one comes pretty close, considering they were taken over 30 years apart.
edit: the original photo was deleted from Panoramio, so this is a similar one.

And just a quick comparison:

So, in summay: No. There is nothing that you can't do as long as you have the internet.
Posted by Reckless at 7:19 pm

Detective Reid and the Case of the Forgotten Bus methinks. Nice work!

That is just so cool, Reid.