It lives!
And like Frankenstein, it is also a bit patchy, parts are unfinished and it takes up a hell of a lot of room. It also smells funny, but I never met Frankenstein, so I can't vouch for his odour.
I'd planned to put pictures up today, but I took them late last night and forgot to bring the memory card to work. I'll stick them in when I get home.

Putting the rubber t-molding on was harder than I expected. I considered buying a rubber mallet to help, but decided that I'd be able to do it by hand. What should have taken 15 minutes, took over an hour, using a shoe and rolling pin combo.

True to my word, I played The New Zealand story for a couple of hours and discovered that PacMan with an 8-way joystick just isn't going to cut it. I'm either going to have to fix the joystick so it's easily changeable, or get a dedicated 4-way (the preferred option).

As the budget has blown out, I think I'll be making a cheap bezel out of black cardboard to see me through until I can afford a piece of safety glass. It looks pretty rough at the moment, so anything will be an improvement over the gaping hole with paint slopped around it. I'll also have to sort out a temporary fix for the marquee, as that also looks untidy.

Speakers will go in this evening, which will tidy it up a little. The sub is just sitting on the floor at the moment, but that will be getting replaced with a proper amp and volume control at some point soon.

I still haven't sorted out how MAME will actually run either. I need to prevent the monitor from switching resolutions when loading a game, or the poor thing will get worn out really quickly.

So, in short, the whole thing is playable, but quite a way from being "finished". Once I've paid off the current spend, I'll start getting things tidied up. 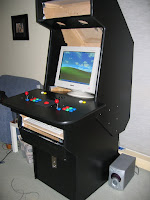 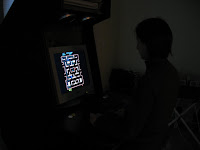 Looks like you have done a really good job. You can now teach me how to use a router! Mal.

Don't spend all your time playing games. I'm sure Debbie would like some of your time too. Good job though Reid. Looks great. Rob

Dude! that thing is awesome!

You have inspired me to, er, keep reading your blog in the hopes i will be inspired to do something one day. :)

Your mame box is coming along fine. Much faster than mine. I have two sugestions:

1. If you are going to use a perspex sheet on your control panel (to have artwork under) take the time and use your router to inset the trackball. It will look much better that way.

2. Be very wary of having your escape key above the trackball. Mine is in a similar position and we were always hitting it accidently when playing Golden Tee golf. Super annoying!! My current control panel is only a test bed for the future super-dooper control panel, so I am thinking of putting in a hidden switch to disable the escape key functionality, or perhaps a recessed escape key...