Quick update: This morning I picked up the monitor that I won on eBay.
I thought I did really well: I printed off evidence of who I was, a map of how to get to the place, biked into the city in the rain, went to the gym, dropped my stuff off at work, caught the train to Victoria Park, walked to the PC place, got the monitor, caught a cab home.
The only problem was when I went to open the door, I realised that my house keys were at work. Bugger.
It's now on a table, outside, sheltered by the barbeque cover. I hope that thing's waterproof!

edit: it didn't rain again today. Rumour has it that it didn't rain for more than 5 minutes anywhere today. I seriously think I had a grey cartoon raincloud over my head, because I was being rained on continuously for at least 30 minutes this morning.
The screen is nice and big, but it's overbright. It basically means that any black pixels look grey because the light is too bright. I'm sure that old arcade monitors look the same, so maybe it'll make it look more authentic or something. 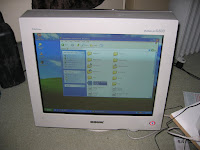 Deb said I'm not allowed the cabinet inside until it stops smelling of paint. The way I see it, I have two options:
1. Leave it outside in the fresh air for a couple of afternoons
2. Make Deb stay at work for a two weeks while the smell dissipates