I got impatient on Thursday waiting for the weekend to come. The solution? Book in an annual leave day at the last minute and spent Friday in the shed :)
It hit 25° after lunch, so it was really nice working downstairs and my weekly walk to Mitre 10 was great.
The result was that I got loads of work done. I pulled last weekend's work apart to fix the not-as-square-as-it-should-be problem I had. The keyboard drawer design was changed a little to make it function better as a computer instead of just a games machine: The drawer front now swings down instead of being attached to the sliding part of the drawer (does that have a name??). The only problem I had was discovering that MDF doesn't like screws put in the end of it, so I had to recess the hinges on the outside. I'll cover those up with a bit of bog, so it won't be visible on the outside. Hopefully I'll never have to remove the drawer for any reason, because it'll be near impossible! 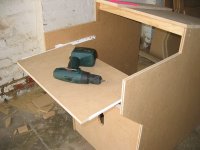 Deb arrived home at just the right time to help put the sides on. After that, it was straight forward attaching the back and top pieces. 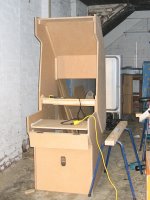 Today's work will hopefully be fitting the speaker panel and getting started on the controls. This is going to be the biggest part, because the layout has to be spot on. If I put a joystick in the wrong place, it'll make playing uncomfortable and will just piss me off.
Just realised that I didn't get button inputs hooked up to the trackball. That's going to make it hard to use as a mouse.

Bugger, I'm off now to see how I can get around that.
Posted by Reckless at 10:13 am