There was a fat guy on my packed train today with a bag in one hand and a pack of Twisties in the other. He could have put away the salty snack treats to have a spare hand to hold on with. He instead chose to put his backpack down so he could gorge himself on crap. He almost fell over twice before Richmond, but only once he'd upended the Twisties, spilling the last crumbs into his gaping mouth (and down his front) would he wipe his hands on his jacket and grab a handle.

There's something about seeing big fat people eat that makes me nauseus. It's like watching someone stab themself in the chest with a knife, except you can't do anything about it without offending someone. Only about 2 percent of obese people can actually claim they have a glandular problem. The rest of them eat too fucking much. True story.
There should be a fat tax, where the higher bmi you have, the higher medicare surcharge you have to pay. People talk about taxing things like McDonald's and Coke to try and get people off the junk food, but has that worked with alcohol and tobacco? No. People drink more now than they used to and it's the health risks, not the cost that makes most people stop smoking. (I realise that booze and fag tax is just a cash cow for governments, but let's pretend you understand where I'm coming from)

Taxing products won't work, but if you're made to weigh in when filing your tax return, people might think twice about licking a chip packet to get the last grains of sugar and salt out of it. The fuckers that let themselves get too fat will end up getting stung at the end of the year. At the very least, they'll be too short of cash to impulse buy a couple of Snickers, at best they will look at changing their lifestyle to avoid the hefty tax bill every 12 months. 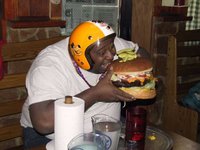 verdict: food for thought
Posted by Reckless at 11:18 pm

Goodness me! That was a very intolerant rant! Did you forget to have your breakfast?

Nope, and I bet you ten bucks the guy on the train didn't forget either!