All of the woodwork is now done (except for that damn speaker panel, which I forgot to do again). I spent hours working on the housing for the control panel (and the control panel itself), but I think it paid off. I'm a bit more comfortable working with wood than I was a few months ago, but there's no way I can afford to rush things as there wasn't enough wood to start another panel if I stuffed it up.
The panel slopes slightly, and it's at just the right height (for me anyway. Screw the rest of you!). It turns out that the trackball did have leads to hook up mouse buttons, so the two black buttons above the ball are them. The two above those are MAME function keys.
I think I'll set up one as ESC (to get back to the main menu) and the other as a shift key. With that one held down, you can map anything you want to any of the other buttons (Volume up/down, pause etc) 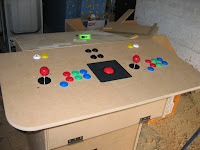 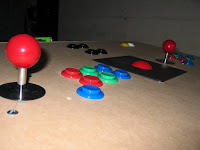 As the budget is pretty much blown out, I don't think I'll be buying fancy speakers and an amp at this stage. I'll just use the old computer speakers and sub that I have lying around. They're not anything amazing, but that will probably add to the authenticity of the game sounds.
Next weekend: bog up all of the screw holes and prepare everything for painting. (shit, and finish that damn speaker panel!)
This week: Think about how to tidy up the controls. I'm thinking a thin sheet of plexiglass with some artwork under it. Failing that, a piece of self adhesive laminate would work just as well.
Posted by Reckless at 5:34 pm