parklife: after the djs went home

We had fantastic weather on Saturday. The sun was out and there was barely any wind. The rain that had been forecast during the week never arrived and by 12.30pm I was drunk. You couldn't ask for a better start for a dance (music) festival.
Hmm, I was going to leave a review of the evening here, but my memory of it all is strangely fuzzy. The bits I remember:
Here are some pics.

Trav and Me. Possibly munted at this point. 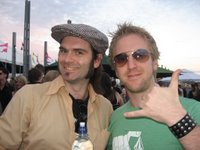 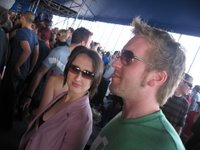 Some random Jamaican dude (hehe, it's Ash)
Geez I've got a big head! 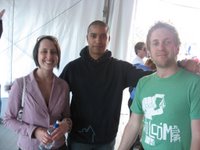