Built the computer on Monday night and it's got to be the easiest part of the project so far! I had flashbacks to my polytech days where we had to change jumper settings depending on the chip speed we were using, create boot discs so we could install the cdrom drivers, which would in turn let us install windows, but only after manually partitioning the hard drive...
That last paragraph will probably only make sense to a few people I know, so don't worry if you're not one of them. All you need to know is that this time it took longer to install Windows than it did to build the PC. 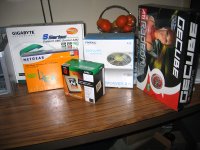 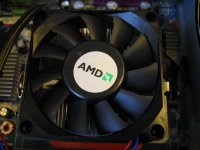 Tonight, I hope to get all of the MAME software installed so it runs seamlessly. Hopefully you won't see any Windows screens at all before you're presented with a game list to choose from. The one problem I'm having is that you can't turn the PC on using just the mouse, even though I've selected it in the bios settings. Maybe I'll just wire up another control panel button to be used as the comp's power button....
Shit, I don't have any spares and it's not worth ordering just one button. I'll have to think of something else.

Update: Picked up a flourescent light fitting for behind the marquee. I guess I'll have to start thinking about what artwork I want up there. 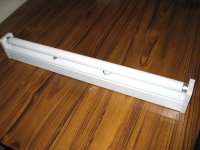